Reverse vending machines, which can handle plastic bottles and beverage cans, were launched in Vellore on Thursday. 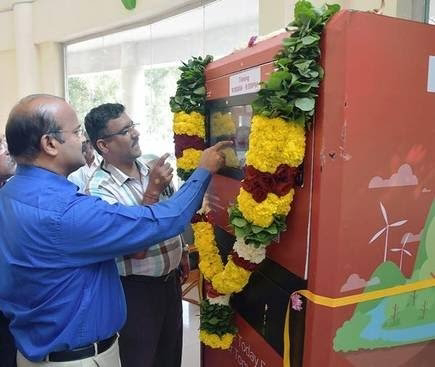 Launching the smart dustbins, District Collector A. Shanmuga Sundaram said the Vellore City Municipal Corporation has taken a number of steps to eradicate single-use plastics. Two reverse vending machines, one at Block B of the Vellore Collectorate and another at the Corporation office, were installed as part of the efforts.

People can dispose of beverage cans and plastic bottles in the machines to prevent clogging of stormwater drains, he said.

The smart dustbins were donated by MRF Limited, Arakkonam, as part of the company’s Corporate Social Responsibility activities.

The machine can crush plastic bottles and aluminum cans into pieces that can be recycled. It can store up to 2,500 bottles at a time and once it reaches the 85% limit, the crushed pieces will be handed over to the recycling units in the city.