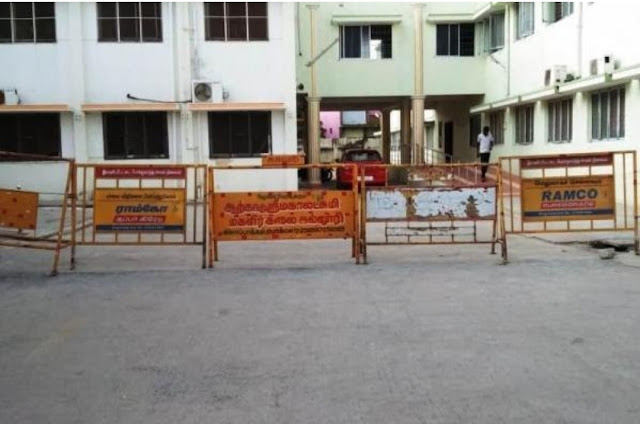 Officials said that the house of the 26 year old man, returning from Dubai, located at Kilvisharam, near Arcot in Ranipet district, was cordoned off restricting movement of the inmates. The entire village is being sanitized by health workers and civic body employees.

"We have advised the family members, of the 26-year-old man testing positive for COVID-19, to stay indoors and not move out. The surrounding areas have been brought under close surveillance," a senior official of Health Department said on Thursday.
﻿

Tamil Nadu Health Minister C Vijayabaskar on Wednesday night informed that the 26 year old man, admitted at the Govt District Headquarters Hospital, Wallajapet, tested positive. He was admitted to the hospital on Tuesday, and had returned to home from Dubai on March 17.

Doctors at the hospital said his condition was stable. Another patient is also undergoing treatment at the hospital which is having a 30-bed makeshift isolation facility. Five persons with symptoms were admitted at Govt Vellore Medical College Hospital (GVMCH) in Adukambarai, and two at CMC hospital in Vellore.

Following the positive case reported from Ranipet district, the entire Vellore region, comprising of Vellore, Tirupathur and Ranipet districts, has been put on high alert. The Health department and civic body workers are pressed into service to disinfect public places and government and private establishments that are allowed to function.
﻿

Surveillance has also been scaled up following the detection of the first positive case. "We have strengthened the mechanism to keep a tab on the home quarantined persons to completely restrict their movements, as also their family members," according to a Revenue department officer.

Special squads, comprising of Revenue, Police and Health department staff, constituted for monitoring the home quarantined have been sensitized on the enhanced surveillance. Meanwhile, a few shops selling essential goods were allowed to open on Thursday morning.
﻿

In Vellore city, a large crowd gathered for purchasing vegetables at the Nethaji market complex in the morning. The officials had a tough time to regulate the crowd.